A dual income property in Hamilton has been a good earner for its owner since 2007, and will prove even more lucrative post-reno.

The second dwelling on this property was also renovated

Isle Wolfe was working as a corporate analyst for Westpac after graduating from university in Hamilton, when she became aware that all the wealthy clients she worked for were backed by property. So, she decided to follow suit, purchasing a 1970s brick and Coloursteel three-bedroom in Glenview, Hamilton for $346,000 in 2007.

The key selling point for her was that the property had multiple dwellings: the main house, a separate garage, and a granny flat out back which could be rented out separately. She also saw potential in the separate garage, which upon purchase was partially converted into a rumpus room, with new carpet and curtains.

Then the Global Financial Crisis (GFC) hit. With negative equity, only five per 5% deposit, and an interest rate of 8.9%, she took a “really big hit”.

Luckily, Glenview was one of the top two suburbs for growth in Hamilton in recent years. It’s close to the hospital, and she’s managed to keep tenants for three to five years, in both of the homes.

She was just 22 when she purchased the property, 13 years on she still owns the Glenview home (plus 11 others) and has weathered many storms to find herself in a healthy financial situation, thanks to good decision making and a clear head.

“I think I was a bit naïve, but I never panicked about the situation,” she says of her post-GFC finances.

She decided to renovate the Glenview home late last year, giving the tenants 90-days’ notice (they moved in 21 days), and started work in January.

She says that the house was “really retro”.

“It had the original kitchen and dining, which were joined by an arch, three retro bedrooms, and an old bathroom, with a moulded shower which had a door,” she explains.

The pokey, dated kitchen was in need of an upgrade. After the renovation, the kitchen is pristine and modern.

The granny flat was also a very dated, in an unattractive beige with a wooden deck, and it too, needed to be freshened up.

Wolfe realised that she would be able to create a new bedroom (bringing the house to four bedrooms) if she sealed off a wall between the kitchen and the bedroom. To ensure the bedroom was comfortable, sound proofing was added, along with insulation, and a door was put in place where the arch had been.

The galley-style kitchen was gutted and replaced by a large L-shaped kitchen from Ex-Space kitchens. The original kitchen had featured an old wetback, which was removed, but the brick wall behind the wetback was maintained and painted white, in a nod to the house’s origins.

The bathroom was another problem area. There had been a heavy enamel bath and a separate shower; these were replaced with a bath with a shower over it. The toilet also needed replacing, and Wolfe was lucky enough to get a great deal from Volcano Group bathroom stockists.

Extra bedroom: A wall was installed next to the kitchen, to create another bedroom.  Bathroom: A new bathroom with modern fixtures has helped lift the house value by $140,000.

“I bought a toilet and six heated towel rails for just $500,” she says. “These are great because we can use them in our other properties as well.

”The flooring all needed to be replaced as well, and the walls needed new paint. Light grey carpet was used throughout, with vinyl for the wet areas.

“I was really lucky with the carpet, it’s really good quality, and I got an end of roll deal from a friend of mine,” says Wolfe.

Wolfe painted the interiors herself, using the ever popular Resene Black White.

“The house had seemed quite dark prior to this, and this worked really well and helped to brighten the whole place up.

”The granny flat was also renovated, freshened up inside and out, and painted white and grey, creating a much more contemporary look. When she originally purchased the property, she split the power between the properties, and built a fence to cordon off the backyard, creating two distinct spaces.

This increases the appeal for tenants looking to have some privacy and helps with increasing the amount she can charge for the two homes.

Before photos — The pokey, dated kitchen was in need of an upgrade. The dated bathroom fittings were ripped out and replaced.

Previously, Wolfe says, the house didn’t have much light, but the combination of a new paint job and opening up the kitchen/lounge space has given it a new freshness that is likely to appeal to tenants. 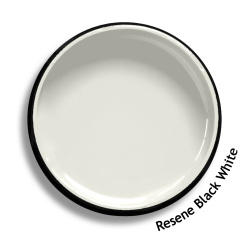 She says that the yield was 7.2% yield when she first bought, but she prefers to look at the cash on cash return of investment as a measure of the success of her ventures.

”Having completed her Hamilton renovation, Wolfe is now about to embark on a new renovation in Whangarei. She has been working full time in property investment since 2015, and looks forward to continuing her journey, with houses in Auckland, Hamilton and Whangarei.