Heather Black specialises in properties no one else wants, and one of her recent renos has proven she's got a great eye for hidden gems.

“Nasty secrets” aren't usually in the check list of desirable attributes for an investment property. But one Palmerston North investor has carved her niche by taking undesirable properties and transforming them into investment gems.

Heather Black is a buy-and-hold investor who spends her time travelling between Auckland and Wellington for work, but she lives and invests in Palmerston North. She's been in the property investment game for a decade and she's honed her skills to such an extent that she can spot a diamond in the rough, even when hidden under the ugliest of exteriors.

“Myself and my husband actually seek out distressed properties that no one else wants,” she explains. “Deceased estates, bad wiring, places that belong to hoarders – anything that we can see potential in.”

The living space post renovation displays Heather Black's unique style sense and has brought the home into the 21st century.

It's a good way to guarantee relatively decent prices, but it's not for the faint hearted. But Black isn't afraid of a bit of dirt and some hard work.

One of her most recent renovations was a large property in Palmerston North that was trapped in a time warp. The previous owners had lived there for nearly 50 years and it showed.

“It was suffering a bit of an identity crisis and needed a lot of maintenance. It was a ‘mixy blob' of 50s, 60s and 80s styles. The husband had recently died, and the wife had the house on the market for four months. It was just sitting there as people didn't really know what to do with it.”

The 220m2 property was built in the 1950s. With four bedrooms plus a study, and a triple garage underneath, it had plenty of space and lots of potential.

“But it really needed opening up as it had lots of weird access ways and didn't have great flow,” says Black.

The removal of a wall has opened up the kitchen/dining area and gives the home much better flow.

Before photos: living space, prior to wall removal and kitchen restyling

It also had a large section with some established plants (and others that had to go). Black's mother Morag runs a business called Garden Solutions in the Hawke's Bay, and she's part of the reno team. Her expertise in the garden was invaluable (“she spent four days in the garden and really transformed it,” says Black).

Black purchased the property for $476,000, which was above what they would usually spend, but she could see much room for upward growth in value once renovations took place.

She negotiated a delayed settlement, which proved extremely useful.

“This was a key to the success of the project. It gave us time to get everything sorted in our heads around what we wanted to do. We went in there twice and took lots of pictures and started the planning process six months before we started work on the house.”

Black and her partner restyled the existing kitchen, saving them thousands.

One of the main jobs was removing a wall that was obscuring a direct line of site from the front entranceway to a wall of windows at the opposite end of the house. This has opened up the house dramatically and vastly improved the flow.

“The windows are plate glass from top to bottom and now that the wall has been removed, you can see the lush garden at the rear of the house when you walk through the front door.”

The kitchen was another area of concern. It was extremely dirty and hadn't been cleaned for many years, but rather than gutting it and starting again, Black and her husband decided to clean it up themselves.

“We don't like to replace kitchens unless we really have to as it is so expensive,” she explains.

“The kitchen all up would have taken about three days, but we were doing it in the weekends and between 6pm and 7am during the week,” says Black. The two bathrooms were both large and as they had only allocated two-and-a-half months for the renovation, they decided to leave them as is.

The master bedroom was recarpeted and repainted.

“It was too big a job to do in our time frame and within our budget. I was confident that it was better to do most of the house really well and leave a few whole rooms/items untouched than it was to do a little in each room as this would not vastly improve any one area as a result.”

These were both tiled (the tiles were left) but much of the rest of the house was re-carpeted with solution-dyed nylon in light grey. The kitchen and living areas had cork tiles, which they chose to cover over with vinyl “planking” that had adhesive backing.

“This was more expensive to buy, but we saved money on labour,” says Black.

The walls were another “mixy blob” of styles – a winning combination of paint and wallpaper in colours ranging from cream and apricot to dark burgundy.

They sealed the wallpaper with a Resene wallpaper sealer (which stops the wallpaper ruining the paint job) and then sprayed all the walls with Resene Zylon Sheen in Alabaster.

“We bought a commercial paint sprayer for about $1,000 and while it was quite expensive initially, it's been really useful,” says Black.

The large office is ideal for a professional working couple.

The renovation started in September 2017 (the house was purchased in April the same year) and after spending over two months on the renovation, Black estimates they were two-thirds through when they decided to get a valuation done in December 2017. It came back at $650,000.

Black and her husband have decided to live in the house for the meantime (with three-car garaging it has masses of storage for all their reno tools). She feels that she has learned a valuable lesson by purchasing something out of their usual price range.

“It shows that you can buy a higher value house and still create lots of value through hard work and not much money, if you're careful and don't overcapitalise. This one was our best return ever.” 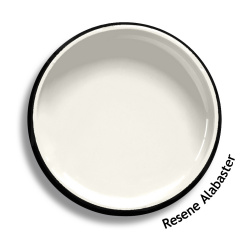